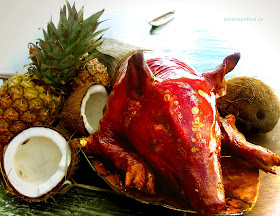 I didn't know what to expect when I went to Bali. I had only met a few people who had been there, and they claimed it was only worth a pit stop on the way to more exotic Indonesian locations such as Sulawesi or East Java. So I was pleasantly surprised that when you got out of the backpacker ghettos of Kuta and the south beaches there was an incredibly interesting and in your face Balinese culture. 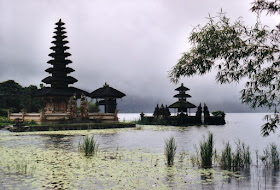 Balinese Hindu temples and monuments are everywhere and almost everyday seems to be some kind of special religious day with music and processions from temple to temple. The food has a  unique mixture of Southeast Asian ingredients mixed with Indian flavours that were imported with Hinduism centuries ago. The traditional roast sucking pig babi guling a good example of this melding of cultures. 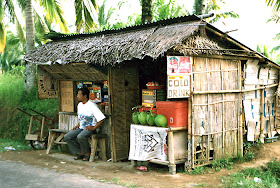 Most Balinese eat several times a day at roadside kitchens called warung. A warung is an Indonesian term for a small roadside stall that sells snacks, drinks and convenient household items. However, in Bali a warung is also the local coffee house, corner store and community meeting spot for neighbours to sit and exchange the latest news or gossip. nasi campur, bakso, and other native dishes can be ordered.
Warung Babi Guling sell the whole roast pig as well, and can be spotted by their signs with the pig painted prominently. 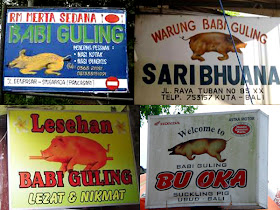 Babi guling has a complex mix of flavours. Turmeric, lemongrass, kaffir and chili are all present. The meat is succulent and the piece of skin that comes with it is like a salty caramelized shard of glass. Ibu Oka in Ubud is probably the most popular of all the babi guling places cooking up to six whole pigs a day. The owners speak English well there so I could ask a few questions about the process and the stuffing. The recipe I came up with was a total success especially since I winged it by taste and memory of my trip in 2007.
Steve's Babi Guling

Roughly chop the following ingredients in a food processor. Amounts are approximate and to taste 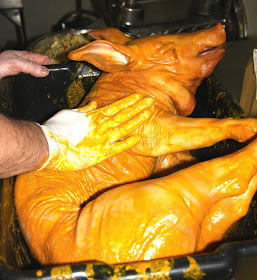 First you rub the skin of the pig well with a mix of turmeric, salt, and water until it is bright yellow. 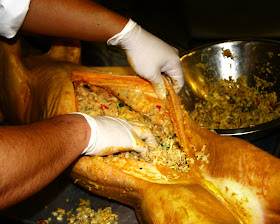 Fill the cavity of the pig with the stuffing and sew shut with bamboo skewers.
place on a wire rack over a drip pan and roast in the oven at 400 degrees for about 2½ to 3 hours. 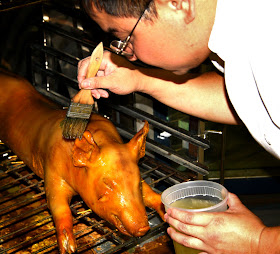 One of the most important parts of the process is basting. You need the water of about 4 coconuts or the liquid of 4 cans of coconut milk. If using coconut milk keep the cans in a refrigerator for about an hour and open the cans from the bottom. This will leave the coconut cream in the can and give you the liquid. Baste the pig with the coconut water every 15 minutes until the pig is done.

I couldn't believe how red and crisp the skin turned out! 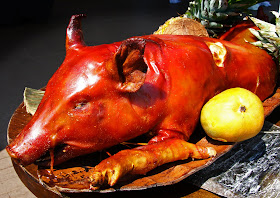 I cooked some jasmine rice and fried it with the drippings from the tray along with some chopped kale, chilies and green onions. and served it with cucumber coriander and chopped peanuts 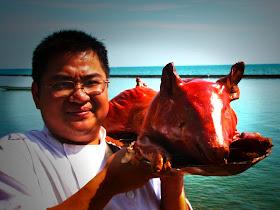